Pre-War is perhaps the best description of 2052-2077 United States. A century of Cold War between the East and West has resulted in the grotesque totalitarian US government. Wondering how life was like before the Great War? Keep reading and I'll tell you all you need to know about Fallout Pre-War America.

2052 was a big year in the Fallout Universe. It marked the beginning of the global Resource Wars, resulting in the collapse of the UN, a genetically engineered plague was spreading through the United States, a terrifying documentary into the desiccated Texas oil fields brought the reality of the energy crisis into the public eye and Nuka Cola introduced their dazzling new blue bottles.

By 2052 most of the civilian population was living under martial law. People were reporting their neighbors as “red spies”, the “thought police” was lurking in the shadows listening in on phone calls, company emails and conversation, seeking to weed out dissidents and lock them away. The dwindling resources and energy crisis saw prices sky rocket and the standard of living began to rapidly decline in all but the most affluent societies.

Countless military checkpoints and National Guard outposts began to dot the map like a spreading rash, their presence however was not aimed at defending against enemies of the state, rather to pacify civil unrest. With liberty replaced with fear and compliance, the population turned to narcotics and hallucinogens, both pharmaceutical and black market, in order to escape their grotesque reality. In many ways the nuclear holocaust was respite from bleak reality that was.

People were scared, people were tired and for the most part they stood together. Some of the pre-war citizens were lucky enough to be oblivious right up until the end, just going about their business living out the twilight of the “World of Tomorrow” / American Dream. The closer people got to the government however, the grimmer their perspective became. Anyone working with the government or on defense contracts were under close surveillance and the full force of Orwellian society rested on their shoulders. Working down the hierarchy scientists and engineers couldn't look away from the fact the technology they were developing would strike the killing blow on society.

Even the men and women working on the factory floors couldn't un-see the Robo-Brains or the Mini-Nukes. Janitors and garbage men losing hair, unable to keep food down, suffering from sever aches and nausea as exposure to radioactive materials began to take a toll on their bodies. People didn't lose hope though; stockpiles of food and clean water, buried in basements and makeshift bunkers suggested that while they expected the worse, they hadn't given up.

In preparation for the ground invasion Chinese intelligence had spies infiltrating and sabotaging industry and research, both civilian and military. The Energy and Resource crisis had crippled the already unstable US economy and with the world on the brink of destruction the wealthy and the ruling elite were grasping at any chance of survival often at the expense of the greater population. Government agencies and wealthy individuals were funding countless research teams trying to develop the means of winning the war or or at least surviving it. Regulations and ethics were shrugged off while mad scientists toyed with doomsday devices and the next stage of human evolution.

Conventional warfare was no longer an option; there was simply no way to feed and fuel an army. Biological agents were being tested secretly on US citizens, aimed at destroying and sterilizing hostile nations. More efficient soldiers needed to be produced. One school of thought aimed to produce a Super Soldier like Marvel's Captain America, however the product (and the human testing) was much closer to the story of Marvel's Isaiah Bradley (that was the FEV) with the isolated experiments and the remnants of the Master's Army still roaming the wastes. 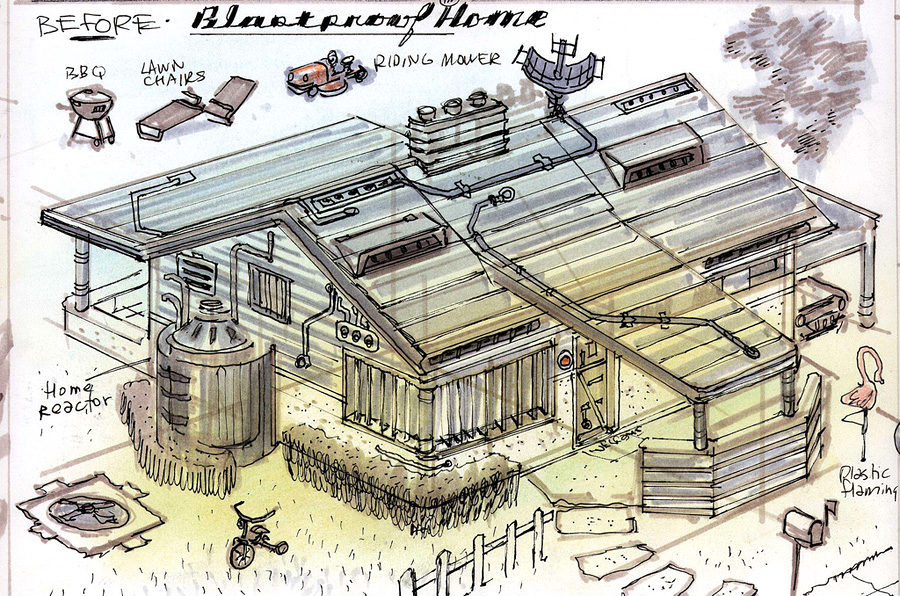 When not being hauled of for experimentation, citizens of Pre-War United States were also faced with the countless indirect consequences of the power struggle. The rapid expansion of nuclear power across the US resulted in wholesale illegal dumping of nuclear waste, anyone who has explored the wasteland can attest to the number of radioactive barrels they encounter in their journeys. Most of the US was already beginning to suffer the effects of radiation exposure long before the bombs fell.

Nuka Cola is but an example of food being intentionally laced with radioactive isotopes, while almost all fresh food and vegetables (seafood in particular) had become dangerously contaminated with radiation. If you find yourself scavenging in a national park or marine conservation facility there's bound to logs of illegal dumping or dangerous levels of pollution. With the Pre-War United States resembling one of George Orwell's wildest dreams, it's a wonder survivors possessed the will to carry on in the face of nuclear annihilation, considering life had already been so bleak for so long.


We hoped you enjoyed this brief insight into Fallout Pre-War America. Stay tuned for more Fallout Facts! Did you find this article interesting? Share it!