Gary would like to have a word with you... It won't take much, as he only has one thing to say to you.

Vault 108 might be the creepiest location in Fallout 3, and there are some pretty creepy locations. Located in the Wasteland, south of Canterbury Commons, vault 108 was one of Vault-Tec experimental vaults. This one had a cloning facility where the vault's identifying feature was created: Gary.

Vault 108 Gary was cloned at least 54 times, and each clone was more psychotic than the last one. Why did the vault scientists continue to make Gary clones? The reason is unclear. It would seem that at some point the Gary's began cloning themselves.

All the Gary clones were hostile towards anyone who wasn't “Gary.” Because the Gary clones were all violent, and the vault was running out of space in the “observation rooms” to house them, the vault staff decided to “terminate” the clones. Although they apparently had plans to continue making Gary clones. The holodisk in the cloning lab offers little explanation; only more mystery. 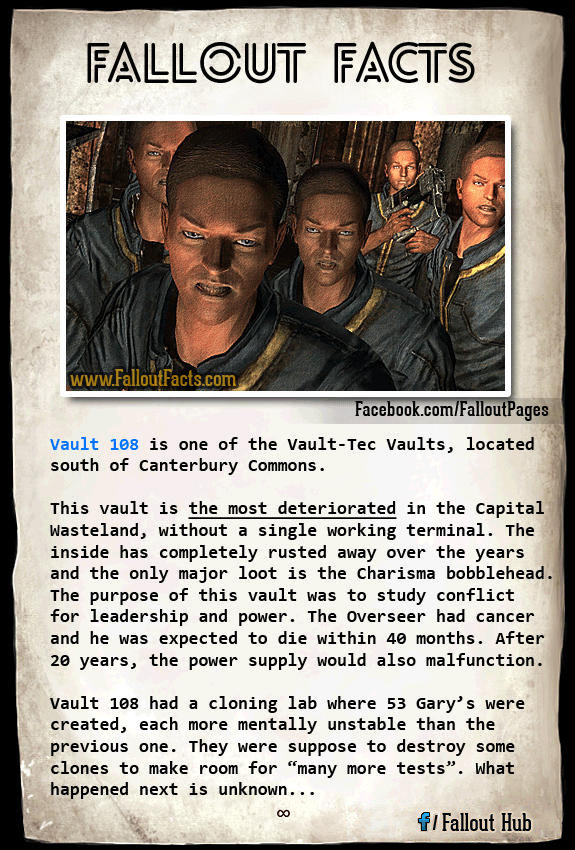 
The reason for these experiments is not clear, but it can be inferred that they had something to do with how leadership roles are assigned and filled in stressful scenarios. The Overseer selected for this vault was known to have cancer and only 3-4 years left to live, which would leave a power vacuum. Many equipment failures were planned, including a power failure of the main power supply, faulty backup power systems, and malfunctioning medical equipment. This, coupled with a total absence of entertainment created a very potentially volatile situation. “All work and no play makes Gary dull boys...”

It is apparent that these weaknesses in the vault infrastructure, the power vacuum in leadership roles, and the dull and stressful living conditions created a situation of vulnerability for the psychotic Gary clones to exploit. Perhaps, once they learned of the cloning facility scientists' plan to start killing the Gary clones, they decided to develop their eerie method of communicating. The Gary clones communicate amongst themselves by simply repeating the name “Gary” in various tones, with each tone fraught with meaning. Whatever the final instigating trigger was, they decided to revolt. Unfortunately for the scientists, this particular vault was stocked with three times the normal weapons in the armory!

Vault 108 is the most deteriorated vault in the Capital Wasteland, without any working terminals. The interior has completely rusted away over the years, the vault jumpsuits are the dirtiest of all, and the only major loot in this vault is the the Charisma bobblehead located in the cloning labs. Just don't let Gary know you want to steal it from him. He won't like that...

I felt bad for Vault 108 Gary but, you know, a wastelander gotta do whatever it takes in order to survive out there. I won't lie to you though, I couldn't stop laughing every time Gary opened his mouth. Too much fun! Anyway, stay tuned for more cool Fallout Facts coming up soon...