Did you know? Wasteland 1 is the spiritual ancestor of Fallout.

In the late 20th century two great superpowers were locked in a titanic struggle for global domination. In the West, the United States of America and its allies and protectorates worked to spread democracy and freedom; on the East, the Soviet Union and its Warsaw Pact states struggled to spread the doctrine of socialism and state-enforced equality. Each side possessed enough nuclear weapons to annihilate all human life on earth many times over. The imminent threat of nuclear war seemed very real, and popular culture reflected that concern in movies like “Red Dawn”, “Mad Max” and “War Games”.

For years, fans of post apocalyptic fiction had entertained themselves with pen-and-paper games like Gamma World, Aftermath, The Morrow Project, and Twilight: 2000. However, computer games of the time were mostly of the fantasy dungeon crawl and sci-fi space blaster genres. Then, in 1988, software developer Interplay changed everything with the release of their Wasteland game. Shipped on four, 5” floppy disks, Wasteland promised hours of roleplaying entertainment and adventure in a harsh, brutal and unforgiving post-nuclear world. The game was a commercial hit. 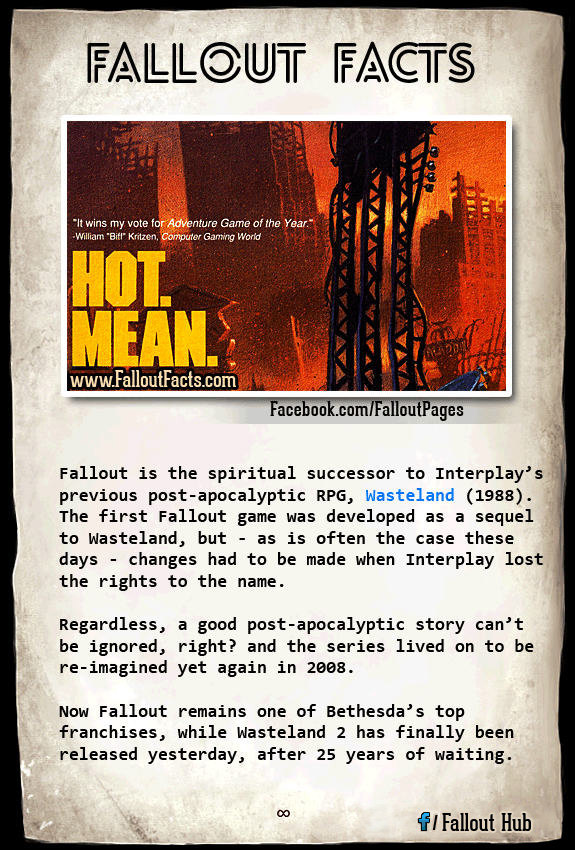 Part of the game's appeal was its focus on an open-ended storyline. Players had to make moral and ethical choices, and those choices had long-term repercussions in the game world. If you destroyed an item and discovered later it was important, too bad; you'd never see it again. Experience was gained through battle, and players could use a variety of tactics to solve problems in the game. For example, to open a locked gate, characters could use anything from lockpick to strength attribute, a crowbar, or even a rocket launcher.

Players began the game with four characters in their party; these could be either stock characters or a player-created group. NPCs could be hired during the course of play, and these had unique personalities and behavior patterns. Unlike other roleplaying games of the time, these hirelings would occasionally refuse to give up items or follow orders. They might even leave the party without warning. 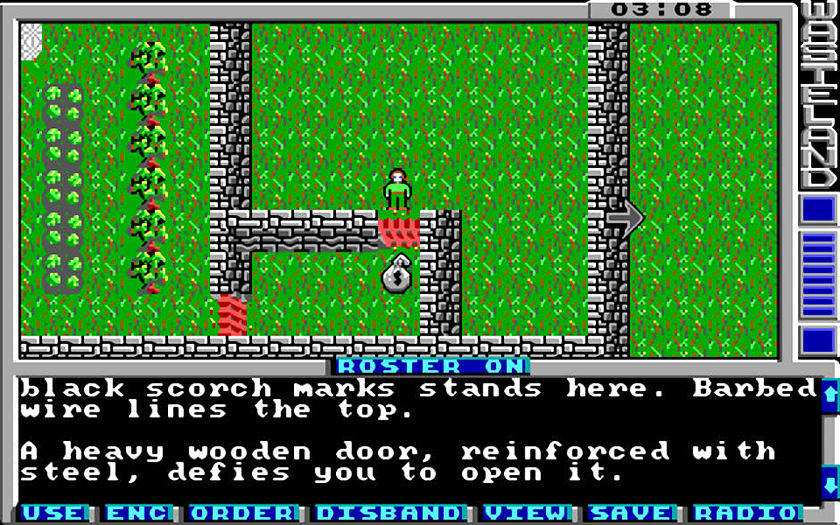 Wasteland was also notable for its high and unforgiving difficulty level - there was only one saved game, and enemies were merciless and ruthless - and for its graphic descriptions of combat damage. Enemies (and characters) could be “brutalized,” “pummeled,” reduced to a “fine red mist,” or “explode like a blood sausage.” This was enough to earn the Wasteland game an unofficial PG-13 rating in the United States (the ESRB had not yet been formed).

Another unique feature was the booklets the game shipped with. At times during play, the game would instruct the player to read specific paragraphs from an included book, wherein encounters and interactions would be described in detail. It also served as crude copy protection, since many important clues were hidden in the book. There were also more than a few red herrings, such as the first paragraph:

"You creep up to the window and, in the soft, muted lights, you see a tall woman with long, blond hair. She sits before a mirror and brushes her hair then stands and walks over to the sunken tub off to her left. She kneels and her blue, silken robe drops to the floor. She turns the water on and steam slowly fills the air.

You watch in fascination as she reaches down into the tub, whirls, and points an Uzi in your direction. “Stop reading paragraphs you're not supposed to read, creeps.” She sighs deeply. “Next time I'm going to demand they put me in a Bard's Tale game, this Wasteland duty is dangerous.”

Others were less obvious, and would give false clues or bad information that could get cheating players' parties killed.

The Wasteland game was set in the year 2087, 89 years after a nuclear war that devastated the world in 1998. Remnants of the U.S. Army calling itself the Desert Rangers set up camp in the Southwest (near the ruins of Las Vegas). The player's team is assigned to explore the wasteland, searching for other human refugees. Gradually, a larger plot is uncovered, and the party discovers a menace that threatens to exterminate what's left of humanity with an army of killer machines and robots. 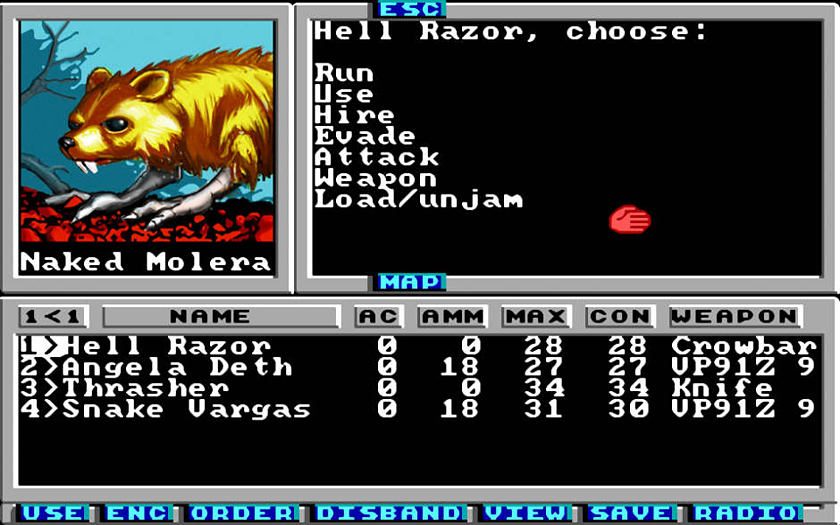 The release of Wasteland led eventually to the development of the Fallout series, with Fallout 1 released in 1997 (a year before the nuclear war of Wasteland was supposed to happen). Fallout owes much of its theme and style to Wasteland. In fact, every Fallout game refers to the game world as “the wasteland” and a group called the Desert Rangers actually appears in Fallout: New Vegas.

In 2012, development began on Wasteland 2 by inXile entertainment. The development team included the original Wasteland designers and was crowdfunded through a Kickstarter campaign. Wasteland 2 was released, to massive critical acclaim and overwhelmingly positive reviews, on September 19, 2014. It had raised nearly $3 million through its campaign and was the third-highest crowdfunded video game ever. It continues the story told in the original Wasteland game, but with modern gaming technology and a greatly expanded world. If you're a fan of the classics, Wasteland 2 is a game worth checking out.


Next read: Should Fallout 4 take place in Boston?


And that's all we've got on the Wasteland Game, the spiritual successor of Fallout. Stay tuned for more Fallout Facts coming up soon-ish...