Wanamingos - my girlfriend just calls them “slap monsters”... These weird, slippery aliens only appear in Fallout 2. Okay, okay, they aren't aliens. They are mutated creatures created by a “tailored” FEV virus for the purpose of warfare. Fallout 2 Wanamingos are very difficult to deal with as they often attack in large groups and have a high laser resistance. 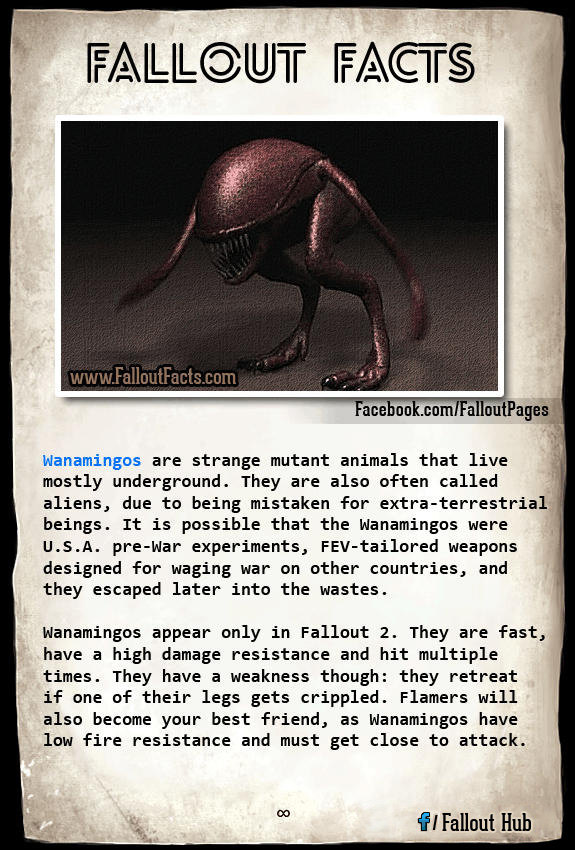 Not only is the Wanamingo Queen very tough, but the Chosen One must battle through multiple layouts of the cavernous Great Wanamingo Mine against slappy wanamingos in order to reach the disgusting den where the queen protects her eggs. Be sure to destroy the eggs along with the other wanamingos!

This author has found that one of the most effective ways to deal with these subterranean slappy monsters is to sneak close to the slimy Wanamingo Queen hatchery lair and set dynamite mines with very short timers, and then try to get the wanamingos in the area to notice you and chase you along the mine path you have created. It is better to tell any companions you have to wait outside the mine if you choose this method. If you don't want to try this route, Sulik is very effective against wanamingos with his sledge and high hit points. Take plenty of jet. It wouldn't hurt to give some to Sulik and your other companions as well. Be warned: the wanamingos have lots of action points...

This Wanamingo Queen is the only one to exist in the year 2241, therefore if the Chosen One destroys this Wanamingo Nest, it is thought that all the remaining wanamingos will eventually die out and the mutated race will become extinct well before Caesar starts to form his legion.

There were *severely* mutated wanamingos rumored to be in existence near New Vegas, but aside from some fantastical drawings of these imagined creatures, there have been no confirmed sightings. These were actually conceptualized for inclusion in Fallout 3, but were cut from the final version of the game. Will the wanamingos make a comeback in Fallout 4? This author has seen certain leaked documents that indicate this is a big possibility!


And that's all we've got on the Fallout 2 Wanamingo. Hope you enjoyed the reading. Stay tuned for more cool Fallout Facts coming up soon... Or get the updates via email below.