Frank Horrigan - who is he, what is he, and how to kill him

Frank Horrible, I mean Horrigan, was responsible for multiple atrocious massacres in what used to be California and Oregon. In Fallout 2 cutscenes he is seen killing some defiant peasants, Goris' deathclaw pack in Vault 13, and Matt, the Brotherhood of Steel recruiter at the San Francisco outpost.

It is also believed that Frank Horrigan was responsible for the massacre of the Chosen One's tribe in Arroyo, as well as the massacre of the human inhabitants of Vault 13 who lived there before the Deathclaws. Undoubtedly, Horrigan is responsible for committing many more atrocities and massacres throughout the wastes in the service of the Enclave.

Frank Horrigan was a Secret Service Agent for the Enclave under President Dick Richardson, but was exposed to the Forced Evolutionary Virus (FEV), probably while conducting slaving expeditions with the goal of providing a labor force for the excavation operation at Mariposa Military Base.

Before the FEV transformed Horrigan into an “ultra super mutant with Power Armor,” he was already known for “psychopathic” behaviour, but his position with the Secret Service shielded him from discipline beyond a temporary leave of absence. In 2239, after his transformation, Enclave scientists created a customized suit of Power armor to accommodate his immense size. They grafted it directly onto him, merging the armor with his flesh. Frank Horrigan became, in essence, the first Ultra Super Mutant Cyborg.


Horrigan was a sizeable man before his mutation began. When he began mutating, Enclave scientists immediately secured him in their facilities and began using experimental serums and procedures on him. One serum they used was an experimental modified version of the Forced Evolutionary Virus. It was during this time that the scientists also began assembling his Cybernetic Power Armor. By the end of the Enclave scientists “experiments” Frank Horrigan was over 12 feet tall (4 meters), towering over standard super mutants, and had bionic eyeballs, enhanced arm control servos, and powered leg rotator/actuators. As he was not a “typical” super mutant, the mutagenic serum could not be used against him. He was meant to be a “next generation” super mutant, developed under the authority of and for the use of the Enclave.

Though he resembled super mutants in many ways, many of his fellow Enclave soldiers did not know that he was a mutant because they never saw his mutated form before the Enclave scientists grafted their custom Power Armor onto him. Additionally, he did not have the same speech deficiencies as standard super mutants. This, combined with the fact that he was probably below average intelligence as a human, helped conceal the fact of his transformation from fellow soldiers. 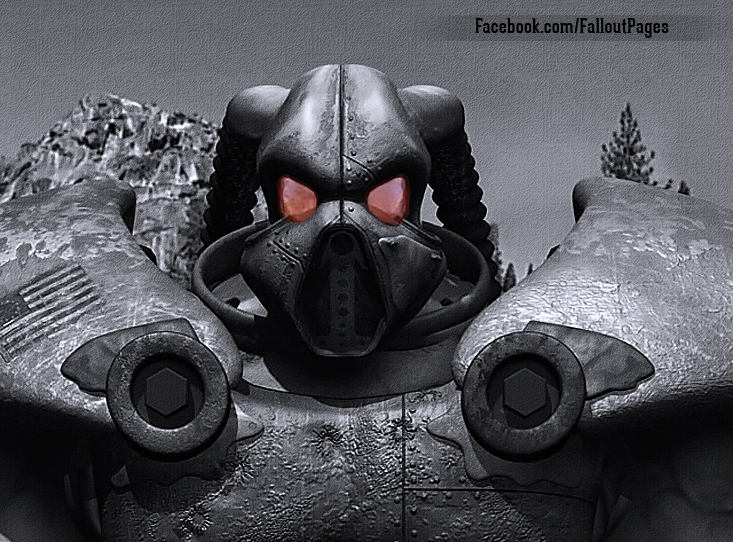 Frank Horrigan is the final boss in Fallout 2, with 999 hit points. His weapons include an End Boss Plasma Gun (which deals 30 to 50 points of damage, has single or burst fire, and a capacity of 50 ammo), and an End Boss Knife (which is as large as a man, does 15-30 damage, has the “Weapon Penetrate”perk, and only weighs one pound for some reason). Frank Horrigan's armor cannot be collected from his corpse since it is grafted on to him, which is unfortunate because it grants the wearer high resistance to small arms fire, explosions, and laser and plasma bolts (though it is vulnerable to electricity).

If the Chosen One is able to defeat this inhuman monster somehow the “mutated toe” will not help, contrary to local legends), Frank Horrigan's body will be sundered in twain. He will crawl around and speak for a while, however, telling the Chosen One that he has activated a nuclear self-destruct device , that the Chosen One will die with him, and that all of the Chosen One's work was for nothing.

“You (cough), you haven't won here. You and your mutie-bastard friends are gonna join me in a big ol' mushroom cloud sendoff. I just triggered the self-destruct. (Heh, heh; cough, cough...)

The work will go on. You didn't do nothing here, 'cept seal your own death warrants. Duty, (cough) honor... courage... Semper Fiiiii....” - Frank Horrigan's last words

How to Kill Frank Horrigan

Lots of players have a hard time facing the final boss in Fallout 2. Here's how to kill Frank Horrigan:

And that's all we've got on Frank Horrigan, the Enclave's finest instrument of warfare. That's it for today, wastelanders! Stay tuned for more Fallout Facts coming up soon... Sooner than you think.