The Legendary Deathclaw - what is it, where is it, and how to kill it.

Perhaps you have heard of the Legendary Deathclaw from Red Lucy, the shrewd businesswoman who runs “The Thorn” beneath Westside. Fighting in arena of The Thorn may be fun and profitable, but it doesn't take long for the Courier and Red Lucy to realize that The Thorn could be even more fun and profitable for both the Courier and Red Lucy with a little adventuresome effort.

Red Lucy will make the “Bleed Me Dry” quest available to the Courier, in which it is necessary to gather the eggs of various wasteland animals, insects, and mutated creatures to sustain and enhance The Thorn. The quest culminates in a mission to find and retrieve Deathclaw eggs. Sounds dangerous, right? Wrong! It is EXTREMELY dangerous, but so worth it (for reasons we'll learn later).

These eggs may be found either in Quarry Junction or by going to Dead Wind Cavern. If the Courier chooses to seek the eggs in Dead Wind Cavern, there is no way to win the loot without facing the Legendary Deathclaw, which has the third highest hit points in Fallout: New Vegas. 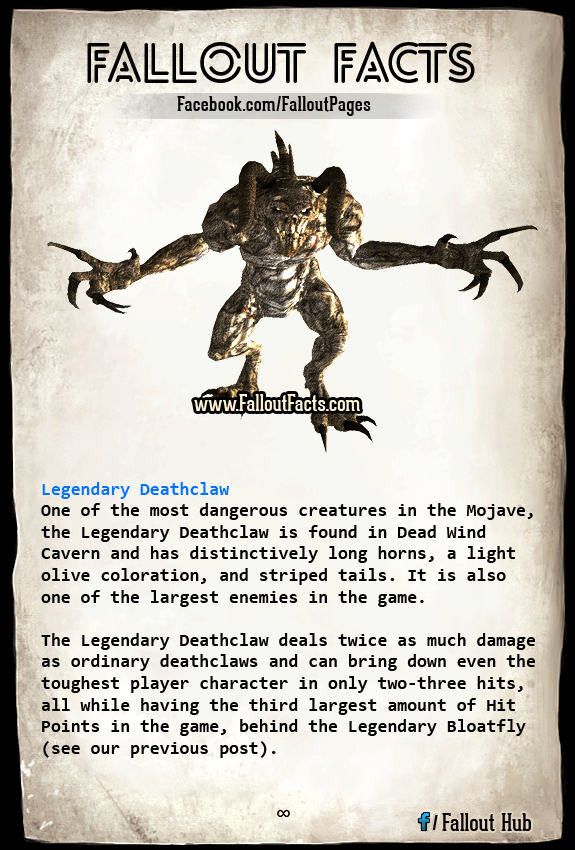 In Fallout 1 and 2, you may have encountered a Mother Deathclaw. You may have decided to kill it. In fact, you may have even encountered Talking Deathclaws, the most famous of which was a possible Companion named Goris. In all of the Fallout games the Deathclaws are formidable and deadly opponents, often attacking in large packs.

There are a few schools of thought regarding killing the Legendary Deathclaw itself. One is to approach it with a companion that you wouldn't mind losing (I personally find that I don't mind losing Boone after a short time of travelling with him). The Courier would then allow Boone (or another companion) to serve as a distraction for the Legendary Deathclaw while setting up a shot with a Fatman, lining up some strikes with Nuka Grenades in V.A.T.S., or setting up a similar devastating attack.


“Have you seen what one of those anti-materiel rifles can do to a deathclaw?” - Gun Runner guard


Another strategy is to enter Dead Wind Cavern in sneak mode with no companions. A few stealthboys would be helpful. Then get as close as possible to the Legendary Deathclaw without being detected, deploy lots of mines, sneak back to a safe distance, and fire at the mines with a missile launcher or Fatman resulting in an Earth-shattering explosion. Remember to do this from a “safe” distance.

As always, my personal favourite method is what I consider to be the most artful. In a dose of poetic justice, I like to equip a Deathclaw Gauntlet, sneak up to the Legendary Deathclaw, and use either ”Paralyzing Palm“ or “Ranger Takedown” to stun the beast. Then use your most gruesome attack to pulverize the Legendary Deathclaw while it is vulnerable.

Completing the quest “Bleed Me Dry” is well worth the effort. In addition to the loot in the cave, which includes Deathclaw Eggs, T-45d Power Armor, a T-45d Power Helmet, a mix of normal and incendiary 40mm grenades, and “Mercy,” a special 40mm automatic rapid fire grenade launcher designed for use against Chinese Hei-Gui commandos, you get to sleep with Red Lucy when you return to the Thorn.


“Your bravery surpasses that of any other, and I've come to admire your actions. Before death takes us, I would know you deeper. Come with me... my Hunter.” - Red Lucy

This is waaay better than a ghoul pr0stitute for sure (like the ghoul and supermutant prostitutes in Quincy in Fallout: Tactics), wouldn't you say?