The Legendary Bloatfly - what is it, where is it, and how to kill it.

If you have never encountered this abomination created by scientific experimentation gone too far, you have never played Old World Blues, the third Fallout: New Vegas add-on. Or you haven't played it enough. This seemingly impossible to kill creature provides an enormous challenge for the Courier. It is a challenge you MUST accept! Most players save their game in a brand new slot when they encounter this vicious flying bug, the Legendary Bloatfly Want to know more about it?

Conventional combat methods are unlikely to work against this fearsome foe. The Legendary Bloatfly can easily fly out of reach of most unarmed and melee attacks the Courier can make. The most artful method of killing bloatflies, with a BB Gun, will almost certainly fail. Even if the Courier attacks with the “Abilene Kid LE BB gun”, the chances are astronomical in scope. Conventional pistols and rifles give the Legendary Bloatfly too much opportunity to kill the Courier with its plasma projectiles (exploding larvae?).

There are a few known strategies to destroy this creature which has more hit points than even the Legendary Deathclaw. If one does not wish to try many times and methods by using a strategically created save game restoration point, it is useful to keep a few things in mind. 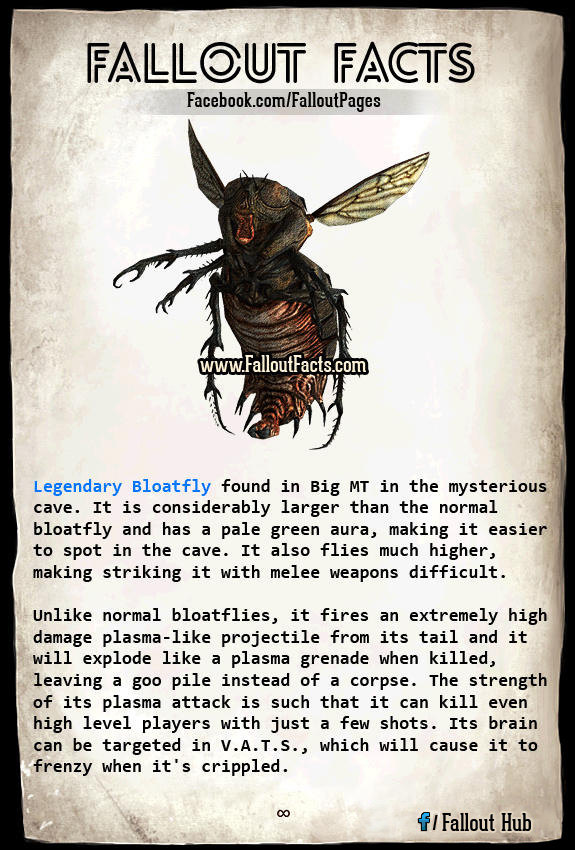 The Legendary Bloatfly can fly to a higher altitude than normal bloatflies, but there is a ledge in its home cavern, The Mysterious Cave, that it cannot fly high enough to reach. If you can sneak to this point and fire at the Legendary Bloatfly while in sneak mode, the resulting Sneak Attack Critical could deal a severe amount of damage to this loathsome insect.

A strategy of firing and backing out of range, then creeping close to fire again is probably the most prudent. It wouldn't hurt to eat Psycho, Buffout, and Mentats to increase your S.P.E.C.I.A.L. abilities.

Players have reported success with Christine's CoS silencer rifle, also available in Old World Blues, and the holorifle, which can be found in the Fallout: New Vegas add-on “Dead Money”.

Any high-powered projectile weapons, and the right chems, abilities, and opportunity should be effective against this vile venomous vermin. However, there has been little success reported by using unarmed and melee attacks (aside from using loads of Turbo and stimpacks). If your Courier favors unarmed or melee combat, this author suggests gaining the “Paralyzing Palm” perk or “Ranger Takedown” perk and going after the menacing mutant with a Deathclaw Gauntlet or a Power Fist variant. Good Luck!


And that's all we've got on Legendary Bloatfly. That's it for today, wastelanders! Stay tuned for more Fallout Facts coming up soon... Sooner than you think. Coming up next: the Legendary Deathclaw.