Throughout the many hours spent playing Fallout, the need to find bigger and better weapons always lingered. With over 500 hours of experience on the last two installments of the series (Fallout 3 and Fallout: New Vegas) I have seen pretty much all the Wasteland can throw at you, whether it's much needed Stimpaks sneakily tucked away in the corner of a destroyed toilet or running into the Legendary Deathclaw for the first (and last time) whilst running away from three other members of his family.

To survive the many challenging obstacles ahead of you a varied arsenal of weapons will be required, in no particular order and in my opinion, the best weapons to help you through your travels in the Wasteland. Without further ado, I present to you Top 10 Fallout Weapons. 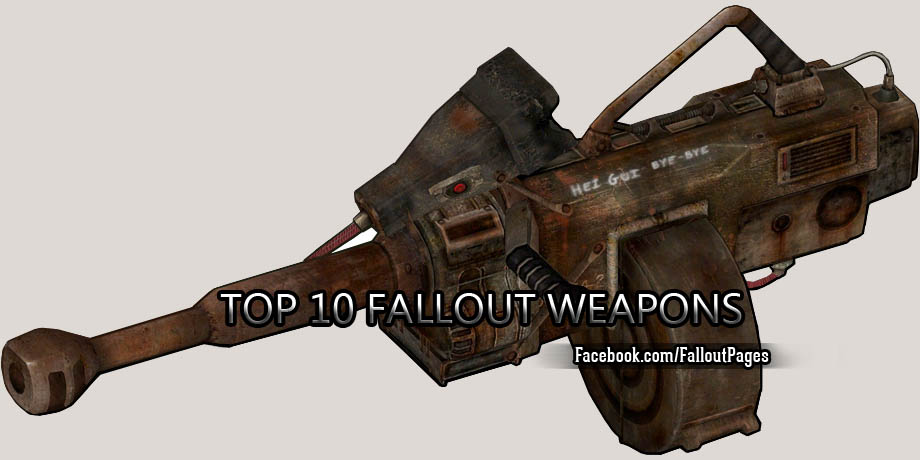 10. Fisto! (Fallout 3)
Firsto! is a unique variant of the pneumatic Power Fist that is more durable and deals higher base damage than the standard model. It can be found in the upper area of the derelict power plant right across from MDPL-13 power station, next to a terminal on a desk. This is northwest of Minefield. Inside the power plant are multiple feral ghouls, and, depending on your level, you may also encounter multiple feral ghoul roamers, glowing ones and, with Broken Steel installed, feral ghoul reavers. This Fallout weapon will be in poor condition (~20%) when found.

Fisto! is a handy (pardon the pun) weapon to possess in the Wasteland, especially for players with lower character levels that lack caps or find themselves with limited ammunition.

9. BlackHawk (Fallout 3)
Like the standard scoped .44 magnum, Blackhawk is a powerful, accurate sidearm. It deals more damage than a sniper rifle, and holds a single bullet more. It has no recoil when looking down the scope and firing. You obtain the weapon from Agatha (her house can be found west of the Scrapyard and northeast of Meresti trainyard), after completing the quest "Agatha's Song" and giving her the sheet music book, but you have to ask for a reward to obtain the revolver.

Who doesn't love wandering the wasteland holding a 44. Magnum like Clint Eastwood? Do you feel lucky, Raider? Well, do ya?

8. Lincoln's Repeater (Fallout 3)
Lincoln's repeater is a very high-powered lever-action rifle, dealing 25 more damage than the hunting rifle. It lacks a scope, but accuracy at long range can be maintained by ignoring the bugged scope auto-aim. It also has three times the ammunition capacity of the hunting rifle and is very effective at long range in V.A.T.S. Lincoln's repeater can be found in the Museum of History. To obtain it, enter the Museum of History, go through the lobby and enter the room with the statue of a wooly mammoth, left of the skull hanging over the entrance to Underworld.

7. The All-American (Fallout: New Vegas)
The All-American is the unique variant of the semi-automatic Marksman carbine with woodland camouflage, a magazine capacity of 24 and a higher magnification scope. It also bears the distinctive 82nd "All-American" Airborne division insignia.

It is highly accurate, reliable and powerful with its fast rate of fire, making it one of the most versatile weapons in the game. This versatility includes the wide range of 5.56mm ammunition types; players should make sure to stock up on different 5.56mm variants to utilize this weapon to its full potential.

Personally, as a result of its versatility I find myself using this gun as the ammo is easy to acquire and is very durable for long missions within and out of the Mojave.

6. Vengeance (Fallout 3)
Vengeance has one of the highest DPS (Damage Per Second) ratings of all automatic weapons in Fallout 3, and can handily slaughter most opponents. Like all Gatling lasers, it runs on electron charge packs.

Vengeance can be found in the Deathclaw Sanctuary, which is located in a mountain, west of Paradise Falls near the Potomac, and southwest from Fort Constantine, right next to Broadcast tower KB5. The sanctuary outside has a small number of deathclaws, and around ten reside in the sanctuary itself. There is also usually an Enclave outpost close to the entrance, so beware. Vengeance can fire a total of about 3,000 beams, the equivalent of 13 reloads, from full condition before breaking.

5. Minigun (Fallout 3 & New Vegas)
The Mini-gun is a multi-barrel machine gun with a high rate of fire, employing Gatling-style rotating barrels. It was a standard military weapon before the Great War, with Rockwell's CZ series being the most popular choice in the United States.

It is widely used by many factions such as the Super Mutants, Brotherhood of Steel and the Enclave, due to its extraordinary firepower at close range. This weapon is extremely useful when swarmed by enemies due to its high fire rate, not many enemies will be left standing after you empty the linked ammunition. Perhaps, only Liberty Prime, a super mutant Behemoth or the Predator (yes, the one from the movie) can survive such a barrage of bullets at a close range.

4. Mercy (Fallout: New Vegas)
A veritable relic, Mercy is a pre-War US Army automatic grenade launcher that was apparently used by one of the US Army's counter-insurgency units hunting Chinese Hei-Gui commandos in the American southwest. Presumably during this period, one of its operators spray-painted "Hei Gui Bye Bye" on the chassis. At an undetermined time, it was obtained by the Brotherhood of Steel and continued to serve as a weapon, eventually ending up in the hands of a Paladin in the Mojave chapter. It was lost when its operator was killed while exploring Dead Wind Cavern.

BEWARE! This location host several deathclaws including the Legendary Deathclaw, which can be a real challenge for even the most hardened Fallout player, as its damage is much greater than any average deathclaws. This can result in even a level 30+ player dying as a result of one hit from the Legendary Deathclaw, little wonder as to why the name of the gun is "Mercy", as it offers you just that in a time of need, although its last owner did not share the same fate nor luck as your character.

Mercy can fire a total of about 2,500 standard rounds of 40mm grenades, the equivalent of 140 reloads, from full condition before breaking.

3. Anti-Material Rifle (AMR) (Fallout: New Vegas)
The Anti-Material Rifle makes this list as it is one of the better sniper rifles available in the game. This unique version of the sniper rifle is especially lethal against targets who possess strong or heavy armor and has a various range of bullets which can be used to kill your opponent, such range includes, standard, armor piercing, explosive and incendiary rounds.

This weapon is especially useful for players who wish to acquire NCR Ranger armor from an NPC without having to deal with the consequences of their actions. The AMR comes in handy as its incredible long range and accuracy allows players to sneak attack NCR Rangers from a distance of over 100 yards which almost always results in a one-hit-kill without a loss of Karma or Reputation with the New California Republic. Due to your character being well out of eyesight it's as simple as walking up to the dead NPC and taking his NCR Ranger armor.

Additionally, its .50 MG ammunition is very uncommon, very expensive, and is heavy if carried in bulk in hardcore mode; a full magazine weighs two pounds without the Pack Rat perk, and one pound with the perk. When fired from the hip (without aiming), the resulting recoil from the weapons large caliber will result in the user being pushed backwards (evident in third-person view).

2. Firelance (Fallout 3)
The Firelance is a unique variant of the Alien Blaster. This weapon packs an astonishing 100% critical chance and damage, like its basic twin model, this unique weapon uses the same rare alien power cells as the Alien Blaster. Therefore carefully using your ammunition for tough battles or sticky situations is recommended for this weapon. The Firelance can fire 63 shots, the equivalent of 7 reloads, from full condition before you can throw it away.

1. Experimental M.I.R.V (Fallout 3)
Surprise, surprise! #1 is the Experimental M.I.R.V, a modified Fat Man launcher which can be located in the National Guard Depot roughly northeast of the Vault-Tec Headquarters. This weapon deals the most damage in any Fallout game and is capable of firing up to 8 mini nukes at a time. It is an unbelievably impressive complement of weaponry, an absolute death machine.

The Experimental M.I.R.V can fire a total of 63 shots, around 500 mini-nukes before repair is required.

Euclid's C FinderM (Fallout: New Vegas)
The Archimedes II orbital laser releases a huge amount of heat energy, capable of reducing many foes to ashes. In order to use Euclid's C-Finder, the player's character must complete the quest "That Lucky Old Sun" and choose to direct power to Archimedes II at the end of the quest. The weapon can only be used once every 24-hours in-game, due to the recharge time of the lasers. This therefore is a good weapon to take down the bigger, stronger enemies within the game.

This ends our Top 10 Fallout Weapons list. Within MY list is a varied category of weapons to suit every Fallout fan, although this will not be statistically the best or most powerful weapons in Fallout, they are in my opinion very reliable in making life easier when facing the harsh realities of life in both the decaying Capital Wasteland and the blistering Mojave Desert.


Feel free to leave a message in the comments section with your Top 10 Fallout Weapons list or to simply tell me what you thought about this article. I'd like to hear your opinion. Cheers!